The Christmas season brought good will and a few ills to the Meier Family this year.  Apparently, there was a stomach virus spreading among some of the students and staff during the last week of school before Christmas vacation.

It was during that week that Jared began to throw up his meals and started having some problems with diarrhea.  I assumed he might have been reacting to the amoeba medicine given to him by his doctor.  However, Luke started having the same symptoms during our Christmas break.  By Christmas Eve, both Stephen and I were also feeling ill. We had to decline a Christmas dinner invitation because we were trying to recover. 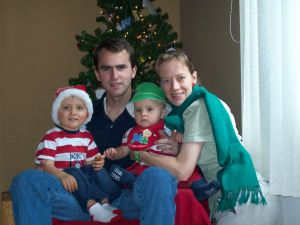 In spite of having weak stomachs, we were able to enjoy Christmas day together.  I actually started feeling better on Christmas day.  Jared had finally recovered from his symptoms and baby Luke was able to keep most of his food down that day.  We were able to talk to our extended family on Skype at different times during the day.

And the family who invited us over for a Christmas meal decided to bring the food to us, so that we could have “a taste of Christmas” at home.

By New Year’s Eve, each of us had fully recovered from our ills.  And I think Little Luke is trying to make up for all the meals he lost during his illness by being hungry all the time.

It will be a Christmas holiday that we will not soon forget.