February 2012 – I have never really come in contact with bats before moving to Texas.  I had seen them in movies and read about them, but I didn’t know you could find them in an average city such as Lake Jackson.  Apparently there are several pockets of bat populations here in northeastern Texas.  Bats did not come to our attention until last fall.  As the weather started getting colder at night, we began to notice this strange scratching and bumping noise outside our bedroom window at night.  Sometimes it would last a few hours.  Sometimes, it would continue throughout the night, making it difficult to sleep.

I thought it might be moths or bugs of some kind bumping up outside our window.  Finally, one night, Stephen decided to shine a flashlight outside to see if he could figure out what it was scare them off with the light. That’s when he told me that he thought they were bats.

At first I didn’t want to believe him.  Why would bats be flying around outside our home?  I thought bats liked to live in caves.  We don’t have caves anywhere near our house.  I took a flashlight outside the house and went to look at the space between the outside of our bedroom and the neighbor’s house next door.  Sure enough, I could see these large winged creatures flying in circles between our two homes.     I wasn’t sure what they were doing or what they might be looking for, but I wasn’t about to try to disturb them.  So, I went back inside the house and did some research on what to do if a bat were to get into your home.

I found that bats are a protected species here in Texas.  People are discouraged from killing them.  If a bat is found in your home, you are supposed to call the wildlife agency in your city and then try to ‘contain’ your bat without harming it until they can come and remove the bat from your home to be relocated in an area where they are allowed to live.

A few weeks later, we had a pest control company come out to check our house for bats.  We hadn’t yet caught a bat in our home, but we were tired of them flying around outside our window.  He told us that bats can nest inside hallows of large tree trunks.  Every house on our street has a few large trees somewhere on their property.  He also told us that bats will sometimes nest in people’s attics, if they find an entrance from the outside. Surprisingly, the guy who came out to check our roof couldn’t find any evidence of bats in our attic or even outside our bedroom window.  They had mysteriously disappeared as quickly as they had arrived.  Since January, we’ve had no more disturbances related to bats.

January 2012 -We have now been living in Texas for over a year. During the first few months, I started to become familiar with the cultural differences between this western state and the very far eastern states in which I lived in the past.  Since I’ve never lived in any other western state, I couldn’t tell you if Texas is similar or different to some of its western neighbors.  I can only compare it to Florida, Georgia, South and North Carolina, Virginia, West Virginia, Maryland, New Jersey and New York where I lived or visited in the first 35 years of my life.

One thing that did become very clear in the first year of living here is what I like to call “the pride of Texas.”  This is the first state that I’ve lived in that focuses on teaching their kids about their state history, legend and lore. It is a required part of their school curriculum and you can even see it in the stories that are found in the library.

I take my kids to a local library on a regular basis and we’ve found well-known children’s stories that have been re-written with a Texan twist.

The Gingerbread Man has become “The Gingerbread Cowboy.”  This cowboy made of gingerbread goes running across the desserts of Texas being chased by cowboys, buffalo and other Texan ‘villains’ before being eaten by the sly coyote crossing a river.

Then there is the slightly disturbing retelling of the three little pigs in a story about three little gators being chased by a ‘big bottomed boar’.  The boar destroys the first two gator’s flimsy homes with a “bump, bump, bump” of his large rump.  When he can’t knock down the third gator’s home, he tries to scoot his body (rump first) down the chimney.  The gators respond by heating up their grill.  The boar’s large behind gets slightly charred at which point he quickly retrieves his large proportions out of the chimney and runs away never to be seen again.

Side note: My sons really got a kick out of me acting out the role of the big-bottom boar knocking down the gators’ homes.

I think my favorite book so far is the Texas ABC’s.  Every letter of the alphabet has a picture of something from Texas.  Jared helped me take pictures of the pages, because I thought they were so cute. 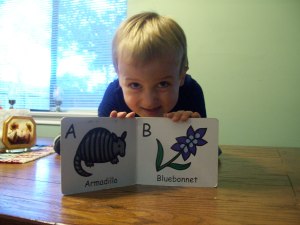 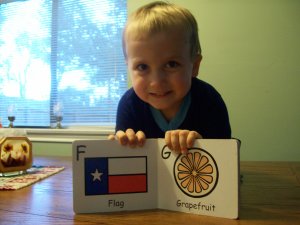 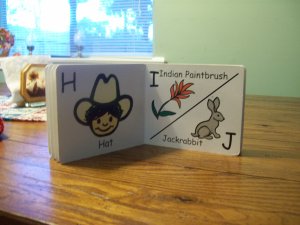 I’m sure there are other books re-told Texan style.  I’ve only pointed out the few examples with which I have already become familiar.  Let me know if you know of any more, or if you know of another state that has its own similar stories.

Learning my way around Lake Jackson hasn’t really taken a compass and detailed map.  After several weekends of garage sale visits, I found that I was becoming very familiar with the small city’s winding, curving roads.  Most of the roads tend to make a circular or half-moon shape throughout the city, so that there are about five different ways to get to the same place at about the same time.

I’ve never lived in a city with so many street names with the word “way.” My favorite street names have to be “This Way” and “That Way”, but there are also the following intersting names:

I think the person in charge of creating names for the streets around here was trying to be funny or play a joke on its citizens and then the joke stuck. All the streets that aren’t named “way” are named after some kind of vegetation of floral, fruit or tree variety. Lake Jackson is so small that it takes no more than 1o minutes to drive through it from north to south.  Right now anyone driving south from Houston to the beach has to drive straight through the center of Lake Jackson.  However, a lot of construction is being done to create an overpass that will divert the highway traffic away from the city traffic.  One day, it will look really nice.  Right now, there are a lot of construction blocks that people need to drive around carefully.

Jared, Luke and I enjoy watching the squirrels play in our backyard.  They scramble down through the trees that are in our yard and in the field behind the yard.  There seem to be squirrels everywhere we go.  One day, I was driving behind a truck when I noticed that there was a dead quirrel laying out flat on his back on his back bumper.  I just kept staring at it wondering if I should try to tell the driver or if he had left the squirrel there on purpose. Before I had a chance to decide, the truck had turned a corner and left the road we were on.  The last thing I saw was that little squirrel tail whipping about in the breeze.