Jared continues to defy my expectations of him.  I had heard that boys take longer to talk than girls.  I had also heard that children learning more than one language at a time would probably not start talking as soon as children who are learning only one language. 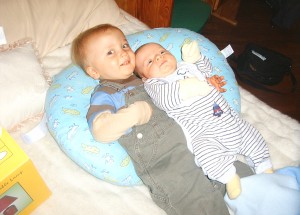 However, Jared has amazed me with his understanding of so many English and Spanish words.  We’ve been playing the “where’s your ______?” game with Jared, and he’ll point out those objects for us.
As his understanding has increased, so has his spoken vocabulary. At 19 months of age, he has learned to say quite a few words.  Now, he doesn’t actually string them together in the form of an intelligible sentence, but he has been able to get his message across.
The challenge comes with words he’s learned to say that are similar to each other.  In these instances, interpretation is all about context.

Here is list of some of the words Jared has learned to say:
“Daddy” and “teddy”:  For a long time, everyone was “Mama”, but finally he learned how to call his father, “Daddy.”  It was about the same time that he had learned how to say “teddy” when saw this stuffed creature, which can cause some confusion if you don’t know to which he is referring.
“bottle” and “Bible”:  Jared loves to play with his parents’ water bottles, even if he can’t drink from them yet.  He also learned how to distinguish the book in his bookshelf that is called “Baby’s First Bible.”  It is one of his favorite picture books.
“Papi” and “puppy”: Jared’s grandfather (on his mother’s side) has the title of “Papi” whom Jared is becoming acquainted with through computer visits on the Skype video-cam.  Jared’s stuffed puppies are his favorite sleeping toys.
“juice” and “shoes”: Jared is learning how to drink juice from a Sippy cup.  He also knows that he can’t go outside to play in the park if he doesn’t have his shoes on.
“num-num” (the word for his milk) and “mum-mum” (the word for his food):  These are…of course…words that Jared has made up.  We still have a hard time distinguishing when he’s asking for something to drink or something to eat.

And there are other words that he completely makes up:
“baa” is a book
“die” is Stephen’s Gameboy®
“why” is the word for his stroller. We think he is trying to say “ride,” as in “going for a ride in the stroller” but it always sounds like he’s saying “why.”

There are also a few words his parents say that confuse Jared.  For example, Stephen wanted to teach Jared where his “brain” was.  For a while, Jared would make a flying motion with his hand every time we would ask, “Where is your brain?”
Then, we realized he must be thinking we are saying “plane” (which we had already taught him in English and Spanish because we see a lot of planes fly overhead).  I took some time to teach Jared to point to his head when we asked him, “Where’s your brain?”
After he finally seemed to get the hang of it, we thought we had reached communication success in this area until Stephen asked him, “Jared, where is the airplane?”  Much to our amusement, Jared started pointing to his head again.
Even with these communication challenges, it’s exciting to listen to Jared learn how to speak.  Sometimes he just babbles away in “Jared-talk” and we can’t quite figure out what he’s trying to say.  In those cases, Jared has learned how to use body language.
For instance, he brought a water bottle and his Sippy cup into my bedroom the other day.  I was sitting on the bed, feeding Luke.  I watched curiously as Jared carefully put the water bottle on the ground and then placed the Sippy cup on the ground in front of it.  He took a minute to look up at me and then he dramatically pointed to the water bottle full of water and then at his empty Sippy cup.
Hmm…can you figure out what he wanted me to do?
********************************************
Note: An update was written in May with more words that Jared has learned.
https://mkmeierfam.wordpress.com/2009/06/01/update-on-jared-talk/

It is hard to believe that the month of March is already here.  It makes one sit back and wonder where the first two months of the year disappeared. Here in Quito, Ecuador, the “MK Meier Family” has remained busy and productive.  We finally found renters for our townhouse.  Our new tenant and her two cats are scheduled to move in March 2009.

Here are some of the highlights for this month:

*Jared’s vocabulary is expanding by leaps and bounds

*Luke just might be ready to sleep through the night

*Cristina is officially through with the spring’s qualifying exams for her Ph.D. The question is…”Did she pass?”
*The twists and turns to getting citizenships established for an international newborn in Quito, Ecuador

*Stephen races to become a “hero”

*Stephen was also able to use his frequent flier miles to schedule a trip to the U.S. at the end of April to visit some potential schools who are interested in hiring him next school year.
*Observations of a week of Spiritual Emphasis at AAI
*What it means to honor the country flag in Ecuador

These stories and more are listed on the different pages of our blog.  We invite you to read through them.