Bells are ringing this Christmas, but they aren’t Christmas bells.  Actually, they rang eight days before Christmas and I didn’t even hear them, because they were ringing in Costa Rica while I was in Texas.

The wedding that took place on December 17, 2011, all began with one of those stories where boy meets girl.  Only in this story, boy and girl weren’t that interested in each other until they had parted ways for several years and then found each other again on Facebook.  They had attended the same high school together in Guatemala and shared the common factor of being third culture kids (TCKs).

He had been born in Honduras, lived in Ecuador and Guatemala all his teen years, spent a year in Iraq as part of the National Guard and spent most of the rest of his time in and around Gainesville, Florida.  His parents were both from the U.S. but had been missionaries in Latin American countries his entire life.

As their relationship bloomed, there were many visits back and forth.  He visited Canada.  She made a trip to Florida.  Then the engagement and preparations for a wedding took place.  Where to wed?  The answer seemed simple enough.  Her family was in Costa Rica, so that was where she wanted to get married.

Briana Flores arrived in Florida early in December so that she could become Mrs. Timothy Cobb legally in the U.S.  Then they had the ceremony in Costa Rica a short time after that.  After their honeymoon, they will return to the U.S. and Briana will begin the process of becoming an official U.S. citizen. 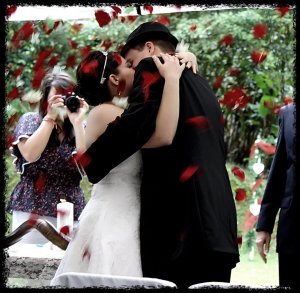 Recently, a Canadian friend of mine who married a Texan, explained to me some of the complications she was going through just to get a green card so that she could start working in the U.S.  Even though she had legally gotten married to an American husband in the U.S., she is not allowed to get a job until she has that green card.

“It’s no wonder there are so many illegal immigrants!” she told me.  “They make it so difficult for people to become legal citizens.”

She had to visit a specialist doctor whose office was more than an hour away from home to verify that she is healthy.  I guess if you are going to have immigrants, you might as well have healthy ones.  There are blood tests and fingerprints and paperwork upon paperwork to legalize and notarize.  And when that is all done, you have to sit and wait and wait until everything gets processed by an immigration office.  Then there will be a special interview scheduled with both my friend and her husband to verify that they really did get married to each other.

When will she be able to apply for actual citizenship after she gets her green card?  According to my friend, it could be about seven years.

Now my youngest brother, Tim, and his lovely bride, Briana, will begin this adventure together.  Will they be able to handle it?  Oh, yeah.  They are TCKs.  Forging the world of multiple cultures is engrained into their nature.  They may not have a lot to start off with, but they’ll have each other.  And they have “Emmanuel” God with them, walking beside them through every step of the journey.

Merry Christmas, Mr. and Mrs. Tim Cobb!  Here’s hoping “ya’ll” might come over to Texas to visit a spell with the MK Meier family someday.  Ya hear? Yi-haw!

Something happened to Kurt Meier on the night of February 17.  No one knows for sure what happened to him.  All his parents know is that he woke up the next morning with bleeding wounds on his head and stated simply that he had fallen down on his way home from work and hit his head.

Kurt lives and works in Portland, Oregon and takes public transportation to and from work.  He bus drops him off within a short walking distance from the home he shares with his parents and sister.

As soon as his parents saw the wounds in the front and back of his head, they knew they had to take him to the hospital.  His mother described the situation as follows:

“He was checked at the VA Hospital and then moved to the Trauma ICU of the OHSU (Oregon Health and Science University). He has a big gash and fracture on the back left side of his skull and bleeding in the part of brain that controls speech. He also has numerous other bruises and scrapes, including a black eye and deep cut on his right forehead. The first three days he was not able to communicate more than a word or two. Saturday he recognized me part of the time I was visiting, sometime speaking clearly, sometimes slurred; sometimes making sense, sometimes not.”

The gashes seem a bit too serious for a simple fall, suggesting that Kurt might have been assaulted and he did not remember it happening.  Perhaps someone was trying to rob him and found that he was carrying nothing but his VA card and a little pocket money.

But nothing can be determined at this time while Kurt is unable to remember what specifically happened to him that evening.  After being in the hospital over the weekend, he began to improve early this week.  On Tuesday, the nurses and doctors were talking about allowing Kurt to go home on Wednesday, but that he should not go back to work until after March 16.  According to his mother, he is home now and is continuing to improve at a slow pace.  He still seems to struggle with some parts of his speech capacity and remembering certain words.

Please keep him in your prayers as he recovers from the injuries to his head and the areas of his brain that were affected. 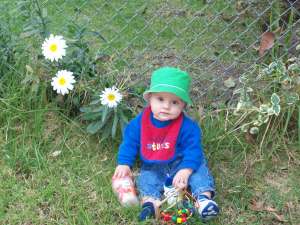 Luke enjoys the sunshine and grass

In the past two weeks, Luke has gone from being a sitter to being a crawler. I have been forgetting to mention this monumental accomplishment in the midst of trying to pass my Ph.D. exams.

However, it has happened. Luke knows how to crawl now and is using his new found mobility to propel him across the room to destinations that might not always be good for him. The other day, I found him dumping all the trash out of the living room trash can. Another time, I found him chewing on a piece of a poster that he had ripped off a wall.

Even though Jared is only 17 months older than Luke, he has long since past the stage of wanting to stick everything in his mouth or pull things off of shelves. Now it’s time to move things back up to unreachable shelves until Luke is old enough to be leave things along. This past weekend, we finally removed the bassinette from his Graco Pack’n Play, because he was starting to pull himself up into a standing position that was precariously close to causing an accidental spill from the side of the crib. I think he is still adjusting to sleeping in the bottom of the Pack’n Play instead of hovering above it in his little bassinette.

It is hard to believe that this little boy was a new born nine months ago and that he will be 10 months old on the 5th of November. It is neat to watch Jared and Luke play together.

Sometimes, Jared is a little bossy, but he does like to help Mamma keep Luke from getting into things that he shouldn’t. Sometimes I’ll hear Jared saying “Baby, don’t do that!” and then I’ll find Luke chewing on something that he shouldn’t chew on.

I guess that’s what big brothers are for, right?